Poems That Make Grown Men Cry: 100 Men on the Words That Move Them (Paperback) 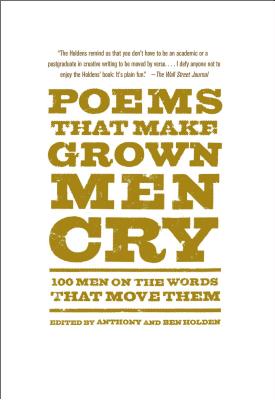 A life-enhancing tour through classic and contemporary poems that have made men cry: “The Holdens remind us that you don’t have to be an academic or a postgraduate in creative writing to be moved by verse….It’s plain fun” (The Wall Street Journal).

Grown men aren’t supposed to cry…Yet in this fascinating anthology, one hundred men—distinguished in literature and film, science and architecture, theater and human rights—confess to being moved to tears by poems that continue to haunt them. Although the majority are public figures not prone to crying, here they admit to breaking down, often in words as powerful as the poems themselves.

Their selections include classics by visionaries, such as Walt Whitman, W.H. Auden, and Philip Larkin, as well as modern works by masters, including Billy Collins, Seamus Heaney, Derek Walcott, and poets who span the globe from Pablo Neruda to Rabindranath Tagore. The poems chosen range from the sixteenth century to the twenty-first, with more than a dozen by women, including Mary Oliver, Elizabeth Bishop, and Gwendolyn Brooks. Their themes range from love in its many guises, through mortality and loss, to the beauty and variety of nature. All are moved to tears by the exquisite way a poet captures, in Alexander Pope’s famous phrase, “what oft was thought, but ne’er so well express’d.”

From J.J. Abrams to John le Carré, Salman Rushdie to Jonathan Franzen, Daniel Radcliffe to Nick Cave to Stephen Fry, Stanley Tucci to Colin Firth to the late Christopher Hitchens, this collection delivers private insight into the souls of men whose writing, acting, and thinking are admired around the world. “Everyone who reads this collection will be roused: disturbed by the pain, exalted in the zest for joy given by poets” (Nadine Gordimer, winner of the Nobel Prize for literature).

Anthony Holden is an award-winning journalist who has published more than thirty books, including He Played For His Wife…And Other Stories and biographies of Laurence Olivier, Tchaikovsky, and Shakespeare. He has published translations of opera, ancient Greek plays, and poetry. He was director of European Film and Television at Exclusive Media, where he helped relaunch Britain’s most famous film production label, Hammer. Anthony Holden lives in London.

"Everyone who reads this collection will be roused: disturbed by the pain, exalted in the zest for joy given by poets."
— Nadine Gordimer