The Foundling: The True Story of a Kidnapping, a Family Secret, and My Search for the Real Me (Hardcover) 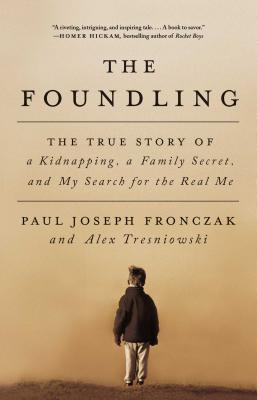 By Paul Joseph Fronczak, Alex Tresniowski (With)
$26.00
Hard to Find

“A gripping tale of secrets and self-discovery.” —People

The Foundling tells the incredible and inspiring true story of Paul Fronczak, a man who recently discovered via a DNA test that he was not who he thought he was—and set out to solve two fifty-year-old mysteries at once. Along the way he upturned the genealogy industry, unearthed his family’s deepest secrets, and broke open the second longest cold-case in US history, all in a desperate bid to find out who he really is.

In 1964, a woman pretending to be a nurse kidnapped an infant boy named Paul Fronczak from a Chicago hospital.

Two years later, police found a boy abandoned outside a variety store in New Jersey. The FBI tracked down Dora Fronczak, the kidnapped infant’s mother, and she identified the abandoned boy as her son. The family spent the next fifty years believing they were whole again—but Paul was always unsure about his true identity.

Then, five years ago—spurred on by the birth of his first child, Emma Faith—Paul took a DNA test. The test revealed definitively that he was not Paul Fronczak. From that moment on, Paul has been on a tireless mission to find the man whose life he’s been living—and to discover who abandoned him, and why.

This is the story of Paul’s heart-wrenching and tortuous journey to solve both mysteries and finally learn the truth about his identity.

The Foundling is a touching and inspiring story about a child lost and faith found, about the permanence of families and the bloodlines that define you, and about the emotional toll of both losing your identity and rediscovering who you truly are.

Paul Joseph Fronczak works for a non-profit organization dedicated to saving lives. He has worked at several colleges, helping people better themselves through education. Paul is a former actor and avid motorcyclist, and he has played bass guitar in several bands. He loves hanging out with his young daughter Emma Faith in Las Vegas, where they live. The Foundling is Paul’s first book.

Alex Tresniowski is a former human-interest writer at People and the bestselling author of several books, most notably The Vendetta, which was purchased by Universal Studios and used as a basis for the movie Public Enemies. His other titles include An Invisible Thread, Waking Up in Heaven, and The Light Between Us.

"A riveting, intriguing, and inspiring tale...For readers who love deep, personal stories of lost and found love and the sometimes strange vagaries of life, this is a book to savor."
— Homer Hickam, Author, Rocket Boys/October Sky and Carrying Albert Home

"Page-turning... will likely appeal to a large swath of readers, from true-crime fans to amateur genealogists."
— Booklist

"A gripping tale of secrets and self-discovery."
— People