Iron, Fire and Ice: The Real History that Inspired Game of Thrones (Hardcover) 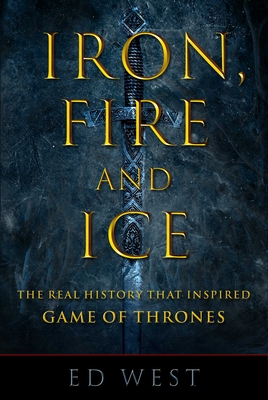 Have you read everything George R.R. Martin has every written? Do you know what in Game of Thrones is based in real history?

A young pretender raises an army to take the throne. Learning of his father’s death, the adolescent, dashing and charismatic and descended from the old kings of the North, vows to avenge him. He is supported in this war by his mother, who has spirited away her two younger sons to safety. Against them is the queen, passionate, proud, and strong-willed and with more of the masculine virtues of the time than most men. She too is battling for the inheritance of her young son, not yet fully grown but already a sadist who takes delight in watching executions.

Sound familiar? It may read like the plot of Game of Thrones. Yet that was also the story of the bloodiest battle in British history, fought at the culmination of the War of the Roses. George RR Martin’s bestselling novels are rife with allusions, inspirations, and flat-out copies of real-life people, events, and places of medieval and Tudor England and Europe. The Red Wedding? Based on actual events in Scottish history. The poisoning of Joffrey Baratheon? Eerily similar to the death of William the Conqueror’s grandson. The Dothraki? Also known as Huns, Magyars, Turks, and Mongols.

Join Ed West, as he explores all of Martin’s influences, from religion to war to powerful women. Discover the real history behind the phenomenon and see for yourself that truth is stranger than fiction.

Ed West is the recently appointed associate director of UK2020, a British policy think tank. Before that, Ed was deputy editor of the Catholic Herald and a frequent contributor to the Daily Telegraph, Evening Standard, Daily Express, and the Guardian. He is a popular British twitter personality and blogs for the Spectator. He currently lives in London.